What Terry Wogan taught me about Business and Life 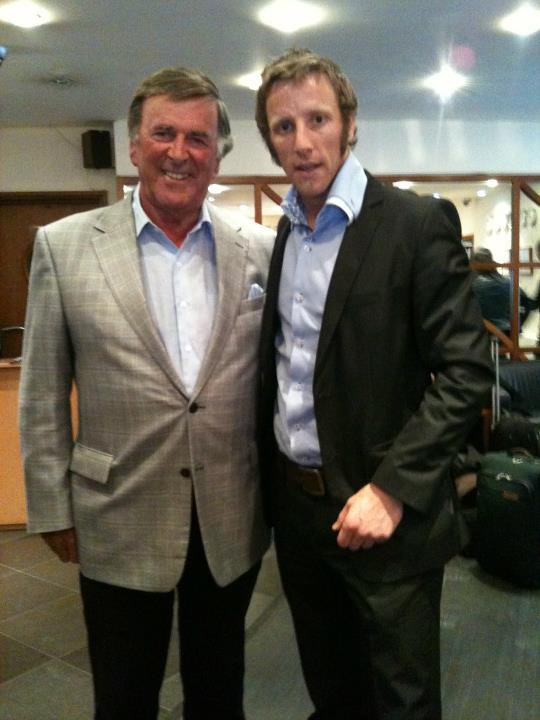 I have always been curious about what sets the average person apart form those who achieve great success in their field. As part of this pursuit I embarked upon a quest several years ago to really drill into this and interviewed some of the most successful people this fair isle has produced. One of the many phenomenal people I met was Limerick’s finest, Terry Wogan. Fortunately Terry was in full health and fantastic form when I met him in London several years back. Below is direct transcription of some of the unbelievable insight I got from one of the most warm and charismatic men I was truly blessed to meet.

Early Influences and the getting started….

It’s very interesting really and I owe a great deal to my late Auntie May, who was also my Godmother. My mother was one of a family of five girls and all of them bar one were maiden aunts. They were all of an era when a lot of the male suitors died in the Great Wars and left a lot of women without possible mates and partners. My Aunty May was the manager of a book store at the time and that ensured that she always kept me stocked with books. The most formative influence in my life was books. I came to books quite young for the time and then there was also the radio. I listened to the radio from the time I was quite young. Not RTE, but the BBC live programmes. I was one of only a very small crew in my class in Crescent Comprehensive who listened to the BBC. We knew what the Goon Show and Take it From Here was and Dick Barnes Special Agent. This, I would say, was a very considerable formative influence on me. It gave me a picture of a bigger world outside of the Shannon, so that was a big influence on me.

I never really imagined myself as a broadcaster though. I suppose like most people who are good at the English language, I thought I might be a journalist. I never really pushed myself though, or had much drive, so couldn’t see how I would go about being a journalist. Then when I came to the end of my schooling in Belvedere College in Dublin I really didn’t know what I wanted to do. I get asked that a lot from young people, as they don’t know what they want to do with their life. Their parents will often say to me,

“He/she doesn’t know what they want to do, have you any advice Terry?”

The truth is that nobody really knows what they want to do. You only know what you want to do if your parents have brainwashed you up to that age about what you should do. In my class in Belvedere a lot of the kids parents were doctors, solicitors, surgeons or accountants and so it followed that their kids would follow in their footsteps. In most cases they did too. Luckily for me my father wasn’t any of these things, but none the less I didn’t know what I wanted to do. I knew I didn’t want to spend another four years or more on a college course that I knew I would have no interest in. The main thing for me was that I didn’t want to continue on with my parents funding my education. It was time for me to make my own way. So I joined the bank, the Royal Bank of Ireland. I did that then for four years.

Then there was an ad in the newspaper for Radio Éireann who were looking for a continuity announcer and news reader. This was around 1960 or 61 and there weren’t many jobs about. At the time every brief less barrister in the country would have been applying for this also. So I applied and got called for an interview. I had to tell them in the Bank I was going to get my teeth checked. So amazingly after a little test and interview they offered me a position as a trainee announcer. So I quit the bank and took the job straight away. I’m sure at the time my parents weren’t best pleased I was giving up a good job in the bank, but I was going to be making £13 and change in old money which was three times what I was on in the bank.

In other words I have been lucky. I always say this to people though, that I have been and things just happened for me. I never thought of being a broadcaster before that. That is a really important thing though, is luck. If you forget how much you owe to luck then you are in trouble. If you think everything you touch turns to gold and you can create all of this yourself, then you’re a fool. Don’t be an ego centric eejit and think that you have all these amazing talents and abilities and nothing was down to luck and it was all your working.

The Right Place at the Right Time….

It was the right time really in Irish radio. Denis Meehan, who was a great great man, was head of presentation in RTE at the time and he brought in a whole lot of young people. He didn’t go for the aforementioned brief less barrister, but instead went for a group of talented young presenters. People like Mike Murphy, Andy O’ Mahony and David Timmlon. He could see the changes coming. In 1961 then TV arrived and everything changed. So to answer your question, yes I couldn’t have joined RTE at a better time for opportunities. You could be reading the news on the radio and then someone would give you a shout and ask would you read the news on the TV and away you’d go and you would do that. Jumping from one to the next. Those opportunities most definitely would not be there for people now and we were most definitely very lucky to come along at that time when RTE was beginning to blossom and come out of itself

On Seizing Opportunities without Fear

As I said to you earlier, I didn’t have any concept of failure and I never thought I was going to fail, as I had never experienced it in my life up to then. Perhaps foolishly, but it served me well. I came across here on a wing and prayer. Earning less than I was in Ireland and bringing my wife and my little son, renting a house and just taking a chance. It never occurred to me that I might have to go back to Ireland with my tail between my legs in 6 months, as I only came over on a 6 month contract. It wasn’t cockiness in any sense, but I just don’t recall it ever being too much of a stressful, or fearful situation.

I also take great comfort in the fact that I can open up a microphone without the slightest idea of what I was going to say. Of course this ability grows with experience and success, but I always found that I could trust myself to know what to say when I opened up the mic. I always found that preparation was not something that you really should get too caught up in as a radio presenter, as if it’s all scripted then it will come out lame and rehearsed. The same I believe goes for television also, despite it being a different medium. The main thing you need to be is confident and relaxed. The one thing you cannot let come across is nervousness. On radio nobody can see the whites of your eyes, but in TV you cannot get away with that and your audience will pick up on that as they’re right up in your face. You cannot make the audience uncomfortable. If you make a mistake, you have to just move along and even with a bit of experience you can turn that into a plus for you. What you cannot do is stumble and embarrass everybody, including yourself.

On legacy, criticism and the importance of loving what you do….

Don’t think that when you leave, you are leaving footprints in the sands of time, because you’re not. Its only television and it’s only radio. I’m never really big on fame and all that, like those poor kids on the X Factor and all these shows. They are going to have their hearts broken and they are going to have their lives broken. You cannot go after and pursue fame and money. You have to go for things you really enjoy, things you can do well, follow your passions and then maybe fame will happen and maybe the money will follow too. Do not chase either of them though.

So in life you find that things that did not appear to be advantageous, can in the end work to your advantage. That’s life really and you never know when the roof is going to fall in. Nobody likes to fail, or nobody likes a bad critique. The most important thing you have to do though is to put things into perspective. The price you have to pay for fame is too high. Your lack of privacy and the constant intrusions are too high a price to pay, no matter how much money you earn.

Of course we all enjoy the applause side of it too. You’d be a fool if you didn’t. It’s not why I enjoy it though. I enjoy it because I found in radio and television something I really love, something I could do in my own way and was good at. That’s what it is about for me. Fame carries too high a price.

Sometimes criticism is gratuitous and almost never constructive. You will know yourself if you have had a stormer and you have to accept it. Sometimes the criticism is not fair, but you have to take it. It’s all part of the business really and it shouldn’t stop you. You should never let the critics have the satisfaction or let them stop you. I do what I do because I love it. I do it and then I go home and switch off. My wife and family are the most important things to me in my life. You do what you do and then you have to realise that it isn’t everything. There are far more important things in life. Money is not everything, success is not everything. You still have to look yourself in the mirror every morning and you still have to be happy in your life. Success doesn’t bring happiness, nor does money.

A true Limerick legend and one of the warmest humans I have had the privilege to share a coffee with. Thank you for your thoughts Terry and all of the memories. Ciao for now – John